PHILADELPHIA–According to the recently released 2018 Synar report, sales of tobacco to youth in Philadelphia more than doubled in 2018, compared to 2017. Driven by illegal sales by tobacco retailers throughout the city, the overall rate of youth tobacco sales in Philadelphia in 2018 was more than twice the state rate. Violations, meaning illegal sales of tobacco to underage buyers, occurred across retailer types, consistent with data from what the Health Department finds during their own compliance check program. The state’s Synar report is developed using the results of a survey during which trained, supervised teens aged 15-17 attempt to buy tobacco at a sample of retail stores across the state. 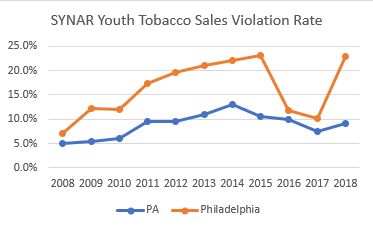 After improving in 2016 and 2017 to a percentage close to the state average, Philadelphia’s youth sales rate more than doubled in 2018. While on average 9% of PA retailers sold tobacco to underage youth, that rate was 23% in Philadelphia. Further, the rate in the next highest region was only 7%, meaning that Philadelphia’s youth sales rate was more than 3 times that of every other region in Pennsylvania. This unprecedented rise in sales of tobacco to youth is worrisome because ninety percent of current smokers started smoking under the age of 18. The high rate of youth sales in Philadelphia by scofflaw tobacco retailers puts the future of our city’s teens at risk.

Philadelphia’s Director of Chronic Disease and Injury Prevention at the Health Department, Dr. Cheryl Bettigole, said, “These 2018 figures are unacceptable. After years of improvement, we were gratified to be making headway against illegal sales of tobacco to our city’s youth. We are committed to redoubling our efforts to ensure that all of Philadelphia’s children are given the best chance at a healthy, long life.”

The Philadelphia Department of Public Health, through its SmokeFreePhilly Tobacco Policy and Control unit, is committed to decreasing sales of tobacco to youth. To do that, the Health Department partners with the Health Promotion Council to run its youth compliance check program, ticketing stores that sell any tobacco product to underage youth. Retailers in the city who sell tobacco to minors more than twice within two years are unable to renew their permits and lose grandfathering under the city’s rules on tobacco permit density and proximity to schools. PDPH offers merchant education in multiple languages to tobacco retailers to train their employees about tobacco sale laws and communicates regularly with retailers about youth sales prevention. The department is also launching a social media campaign and text messaging reporting system to encourage the public to report retailers illegally selling to minors.

The full 2018 Pennsylvania Synar report, with comparison data, can be found online at https://www.health.pa.gov/topics/HealthStatistics/BehavioralStatistics/Synar/Pages/synar.aspx.